Phonetically, Ajo is pronounced AH-hoh and in Spanish it means garlic. It is located just north of the Mexican border by about 40 miles on AZ-85.

This small town is a bit over a hundred miles from Phoenix, but this trip takes you there via Florence, Tucson, and Sells and covers over 360 miles.

Plan on full day of riding and pick one place of interest, otherwise you'll be spending the night somewhere along the way.

Unless you're with a group of hardcore bikers, and hardcore yourself for that matter, travel in the summer months is not recommended because of the intense heat.

Check out this map of the route which leaves from the Phoenix metropolitan area. We completed it clockwise as depicted in the travel videos below, but it doesn't matter how you do it.


View Ajo in a larger map

Here's the typed list of directions for this Ride

It was a chilly day in the early part of May when we did this trip. We departed eastbound on US-60 through Tempe, Mesa, and Apache Jct towards Florence, Arizona. The beginning of this route is known locally as the back way to Tucson.

You'll turn off US-60 at Florence Jct (AZ-79) and travel through Florence. This road is called the Pinal Pioneer Parkway.

The Arizona State Penitentiary is located in Florence and you'll run right past it on 79. If you want to see the downtown area, it's located abut a half mile to the west of AZ-79.

On the south side of town the road curves to the southeast and takes you through some beautiful, pristine desert to Oracle Jct. (AZ-77)

About halfway between Florence and Oracle Jct is the Tom Mix Monument. We stopped there for a break and to put on our leathers because it was getting chilly. Chilly in May in Arizona? Yep, It can happen.

After a right turn onto AZ-77, we headed south for 22 miles through Catalina and Oro Valley and into Tucson. Turn west on Miracle Mile road for about a mile to I-10 east. You can see downtown Tucson on the left as you head 5 miles towards I-15.

Jump off 10 and take 15 south towards Nogales for only a mile to the first exit. (AZ-86) This is the Tucson - Ajo highway.

This is a long leg of the trip and can be interesting if you love the Sonoran desert and understand the rich history of this part of Arizona.

There is a Border Control checkpoint 20 or so miles south on this road. They only check northbound traffic and will wave you through if you're southbound, but I wouldn't recommend just blasting through here. Although there were no stop signs on the southbound side when we were there, it's probably a good idea anyway to make eye contact with the BP agent and let him wave you through.

Continuing south, you'll see the Kitt Peak National Observatory on the left. It's 56 miles south of Tucson and has 24 optical telescopes and 2 radio telescopes. We pulled over near a roadside table and took a few

pictures. Way up on top of the mountain you can see the buildings that contain the telescopes. The elevation of Kitt Peak is 6,875 feet above sea level and it's home to eight different astronomical research institutions that take advantage of the elevation and remote location to have much clearer views of the night sky. They boast the largest collection of optical telescopes in the world. You can ride up the 12 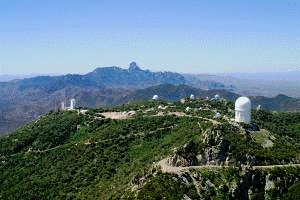 mile paved road to the top and there are many areas to pull over for views and to take pictures. About a mile from the top is a picnic area with picnic tables, restrooms, and water.

There is a Visitor Center that is open to the public daily from 9 a.m. to 4 p.m., except Thanksgiving, Christmas, and New Year’s day.

There are no services up there and cell phone use is prohibited because it interferes with the radio telescopes.

The road is maintained by The State of Arizona, but is on the Tribal Lands of the Tohono O’Odham, so be careful not to do anything without a permit from the tribe other than driving and taking photos. Permits can be obtained from the Tribal Administration Office in Sells, Arizona (520-383-2028)

Beyond Kitt Peak is the town of Sells, Arizona. Sells is the capitol of the Tohono O'Odham nation and is the southernmost part of the trip, coming in less than 30 miles from the international border with Mexico.

In fact, The Tohono O'Odham reservation extends at least that far into Mexico. The entire reservation is not contiguous. It's main part, which lies mostly in Pima county Arizona, is considerably large and covers over 4 thousand square miles. The O'Odham people are still affected by the international border and must have passports to travel between the United States and Mexico, through lands they've inhabited for thousands of years.

As you work your way towards Ajo, you'll traverse long stretches of straight road where it seems to disappear into the horizon. On the western edge is the town of Why, Arizona.

Why has a nice convenience store/gas station and a small casino. Four miles from Why is the Organ Pipe National Monument. The Kris Eggle Visitor Center is 22 miles south of Why.

Approaching Ajo, which is only 10 miles from Why, you'll see gigantic mountains of slag which were deposited from the smelter operations of the open pit copper mine. The mine was closed in 1985 following a bitter strike.

Our intention was to stop there for an early dinner, but it was Sunday and nothing was open except a few fast food joints, so we plodded on another 40 miles or so to Gila Bend.

There is another border checkpoint between Ajo and Gila Bend where all northbound traffic is stopped. The agent there was really interested in my helmet cam and we chatted it up for a minute. He asked me my citizenship and I said American and we were on our way.

Gila Bend gathers it's name from it's location which is a bend in the Gila River. For many years it had the honor of being the hottest spot in the nation until Laughlin Nevada began to grow. During the summer months, temperatures would regularly exceed 115°. 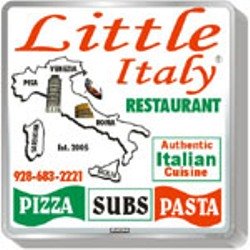 We found an excellent Italian restaurant on the main drag and really enjoyed the food and service. It's called the Little Italy Italian Restaurant. They have the distinction of recently serving the 3rd in line to the British throne... Prince Harry.

He was in town in late 2011 as part of his Apache helicopter training at Gila Bend Air Force Auxiliary Field. While at Little Italy, the Royal Air Force Captain had the "meat lovers pizza," with pepperoni, bacon and sausage.

The final leg of this trip takes you 40 miles on AZ-238 to the town of Maricopa which is part of the Phoenix metropolitan area. It's still way out in far south part of the valley and is surrounded by farm lands.

Another 15 miles north on AZ-347 will connect you with I-10 south of Chandler, Arizona.

Whew! That was a long ride and we'd never been that way before. At the time it seemed like a boring ride, but reflecting back, this ride was kind of neat.