The Arizona Bike Week Ride began at Paul Yafee's Custom shop on Indian School road in Phoenix and made a giant circle around the McDowell mountains.

There was a stop at Greasewood Flat for lunch and music and then we were off to Westworld in Scottsdale to check out the exhibitors, eat, relax, and take in the concert... REO Speedwagon.

It's not Sturgis (yet) but as far as biker rallies go, this is still darn good.

Ending at Westworld in Scottsdale

This 2012 event in Arizona is a week-long event that started the last week of March. During this time, motorcycle enthusiasts and bikers from all over the country come to Phoenix to join the locals in a celebration of our common love for two wheels. It's a huge deal and the whole city is buzzing with things to do.

The best way to get in on the action is to visit the AZ Bike Week website and decide which events you want to participate in.

Tickets can be purchased online for individual days or you can get a 45 dollar, 5 day Event Pass that grants you entry into Cyclefest at Westworld for all 5 days of Cyclefest and includes attractions and all concerts.

This year had some great shows and audiences were treated to performances by Quiet Riot, Puddle of Mud, REO Speedwagon and Tesla.

Purchase the single day ticket online and you can get in on a ride (most of them are charity rides for organizations like the Humane Society, Hospitals, Wildlife and MDA) and gain entrance to Westworld along with that evening's concert.

The prices range from 10 to 35 dollars, depending on which day you go and passenger tickets are usually 5 bucks less.

All you have to do is register online and then show up at the designated location where you check in and get your tickets and wristband. 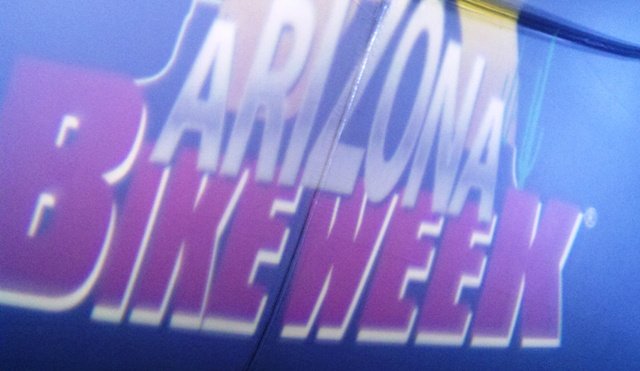 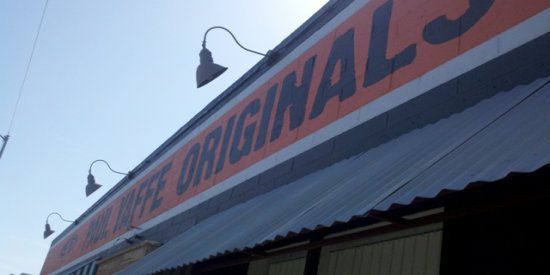 Included on this page and videos below is the Bike Week Dry Heat Run organized by the Hamsters Motorcycle Club benefiting Black Hills Children's Care that took place on Friday, March 30th 2012.

Everyone began showing up at 9 A.M. at Paul Yaffe’s Bagger Nation on Indian School just east of the Squaw Peak Parkway in Phoenix. For those of you that remember, the 51 used to be called the Squaw Peak. It was re-named the Peistewa Peak for political reasons by some governor a few years ago in response to an incident after the invasion of Iraq. Sorry, I didn't mean to politicize this. 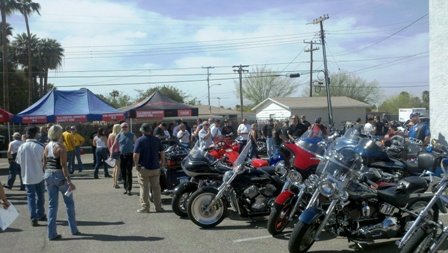 Bagger Nation designs custom choppers and their focus is on converting ordinary touring bikes into radical looking choppers while retaining the touring functionality.

We were invited to register and and then tour the store and the work shop where the magic happens.

At the time he had two custom bikes up on the lifts that appeared to be near the final stages of work in progress.

There were over a hundred riders on site and hanging out. We had fun checking the various custom bikes and paint jobs. 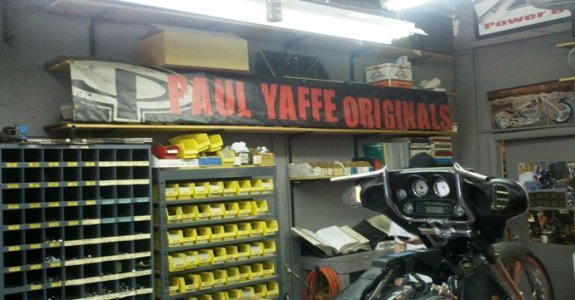 The ride departed at 11 o'clock and was kind of crazy. It was like an "every man for himself" race and I thought it was pretty dangerous.

If you are an inexperienced rider, I'd recommend not trying to keep up with the pack and just take your time and follow the map that they supply.

Traffic was blocked while everyone filed out onto Indian School Road but the signal lights down the road caused the riders to be split up into groups of however many could make it through each intersection before the light turned red.

A short distance from the Shop we got on the freeway taking us north on State Route 51 to the 101 loop around the north side of Phoenix and Scottsdale where we exited on Shea Boulevard towards Fountain Hills.

We turned north just before Beeline Hwy and headed off through the Fort McDowell desert along the Verde River to Rio Verde then west on Rio Verde Road to north Scottsdale.

Then it was south a short distance on Alma School to Greasewood Flat near Pinnacle Peak. Greasewood was an original stagecoach stop between Fort McDowell and Phoenix back in the day. The ride completely 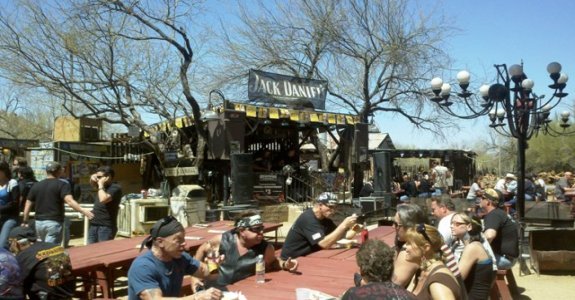 Our Bike Week tickets included a lunch at Greasewood Flat which consisted of a cheap barbeque chicken sandwich and some potato chips. (Somewhat of a let down) Just the same, it was still something to eat.

There was a band playing on stage and many people were hanging out and enjoying the atmosphere.

We stayed for about an hour and a half and viewed some more cool scooters in the parking lot, smoked a cigar and chatted with folks before we headed back out on the road to Westworld for "Cyclefest".

Cyclefest is a wild place to check out. There are hundreds of vendors with all kinds of cycle related products like apparel,custom fabricators, parts and accessories. If you want to camp out on site, a campground is provided too.

Throughout the day there are also bands playing on several stages for your listening enjoyment, stunt shows, and plenty of food and drink. Large tents with picnic tables offer some shade too. 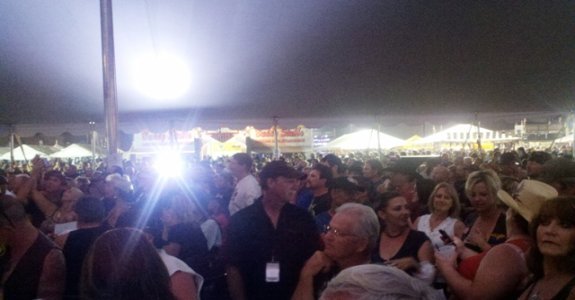 The nightly concerts are great too and we watched REO Speedwagon in the Handlebar Saloon.

The Handlebar Saloon is really just a large tent on top of grass with a few tables and chairs, a stage and area for sound and lighting control.

However, it holds many hundreds of people and begins to rapidly fill up about 30 minutes before the show.

We invaded a couple with a bar table and chairs that had staked out a spot very close to the stage about an hour before the show which started at 9 o'clock. They let us hang out and sit down with them until their friends returned 10 minutes before the show. Then the whole place Rocked!

If you sign up for a ride on the internet, plan on spending the entire day.

One more reminder: Even in March/April, the Arizona sun can wreck you... Bring sun block.


Here's Some More Pics from the Day's Event. To See All The Pics, Visit Our Facebook Page. 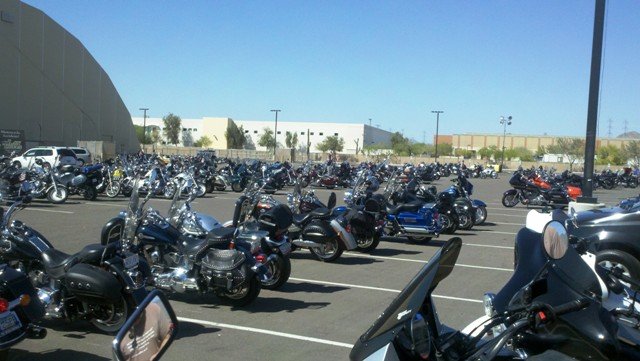 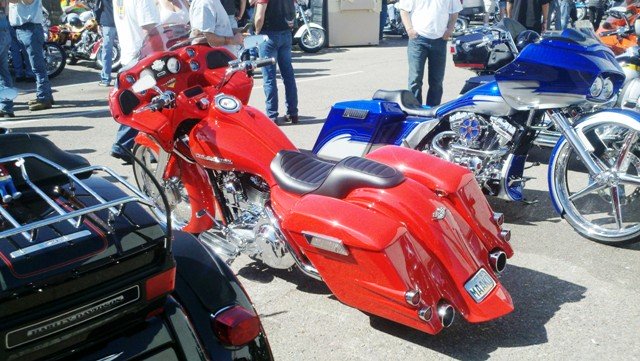 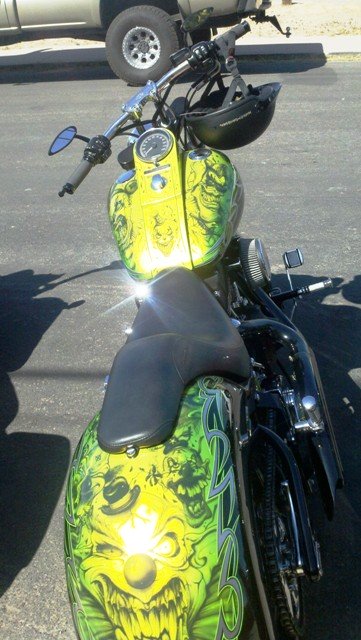 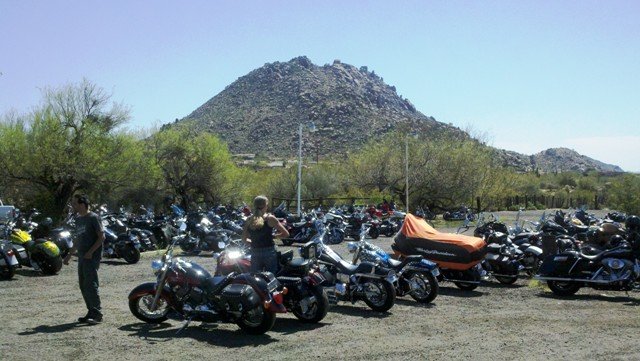 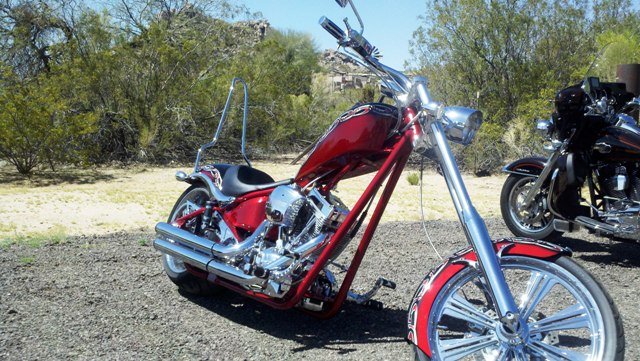 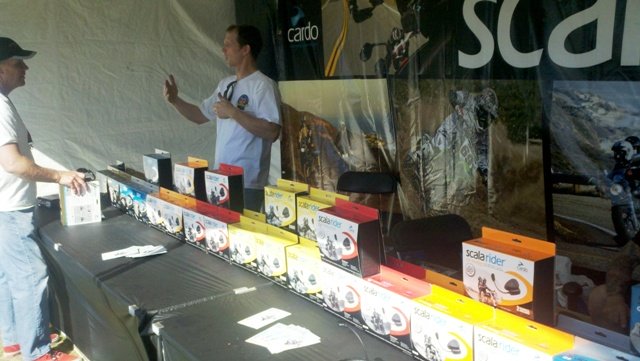 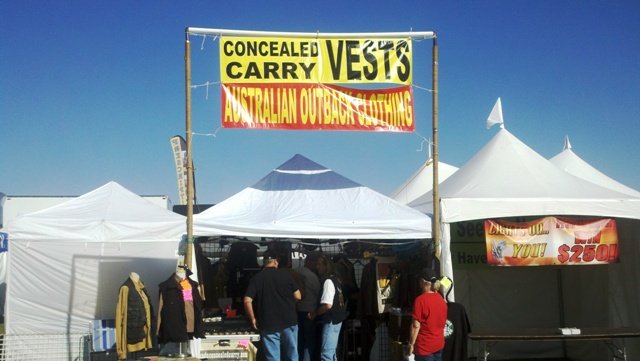 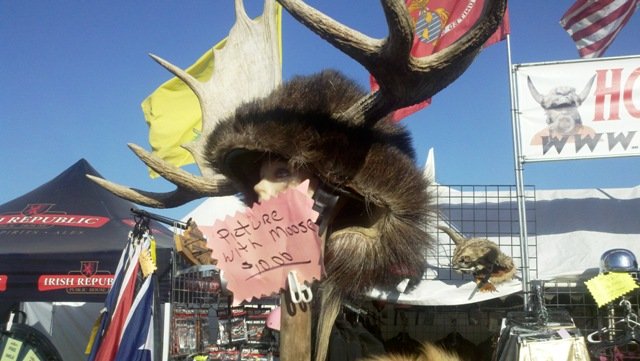 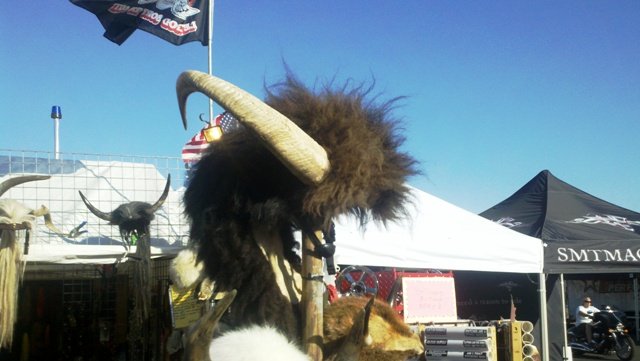 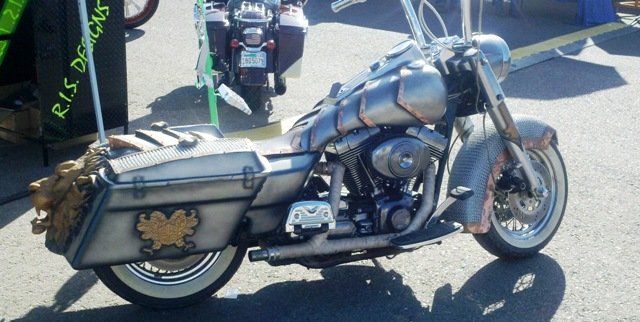 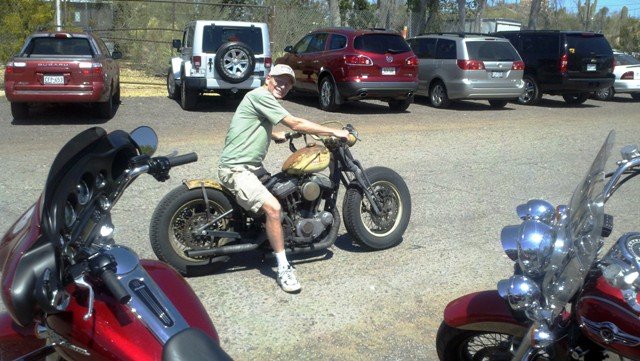 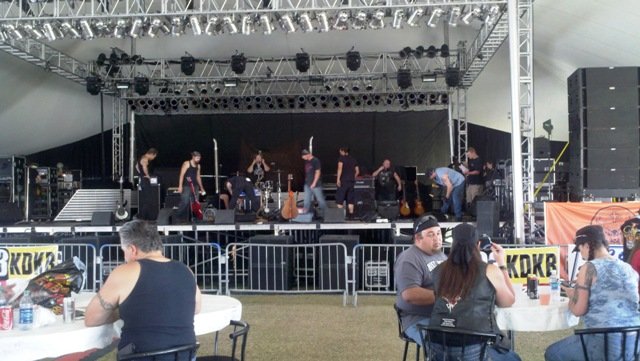